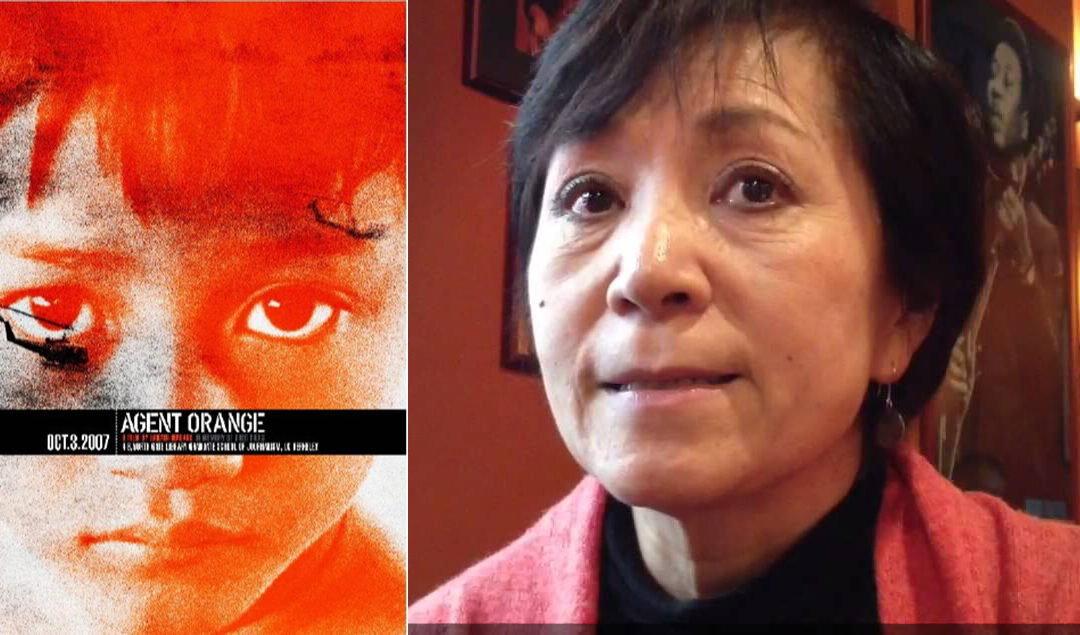 Moved to take up film making after the death of her husband, an American veteran whose cancer was likely caused by exposure to the herbicide during the Vietnam War, Masako Sakata gracefully weaves her husband’s story—and her wrenching loss—with the ongoing impact of Agent Orange on Vietnamese families with disabled children. The Japanese director might have been inspired to embark on a personal journey of discovery and healing, but her revealing, openhearted 2007 documentary speaks to all of us.

This clip takes place in an underprivileged village in Quanh Tri province, a mountainous area that received as much spraying as any area of Vietnam during the war, two mothers struggle to care for their disabled children.

Masako Sakata’s compassion and understanding are palpable in this sequence, even though she has no children of her own. When she met Greg in 1970, he informed her that they could not have children because he was exposed to defoliants during the war.

“Visiting Cam Nghia, I was struck by the poverty,” Sakata relates. “Cooking was done with a few twigs of wood on the floor. Walls were torn plastic sheets. Yet mothers cared for their children with such warmth. I witnessed a very tender moment between a mother and son. I fumbled with my camera and luckily managed to make the exposure right in time so that I could record the scene.”

Greg Davis, my husband of more than 30 years died at the age of 54. The cause was liver cancer, suspected to be brought on by his exposure to the defoliant Agent Orange while he served in U.S. army in Vietnam.

12% of the soil of South Vietnam was contaminated with 19 million gallons of defoliants sprayed between 1961 and 1970. 12 million of which was Agent Orange which contained dioxin, the most toxic chemical invented by man.

To deal with my sadness and loneliness, I started my personal journey to find out about Agent Orange, which was sprayed more than 30 years ago. I knew I needed to return to Vietnam.

I found the victims everywhere, so immediate and present. Children who were not even born then are suffering from all kinds of deformities and illnesses. In spite of such difficulties and poverty, everywhere I found love, caring, warmth. Meeting the victims and their families helped me heal.

The documentary also reveals some of the historical facts that led to unprecedented ecological disaster.

Agent Orange: A personal requiem is an indictment of U.S. foreign policy and corporate greed, as well as being a celebration of love’s ability to face enormous adversity.