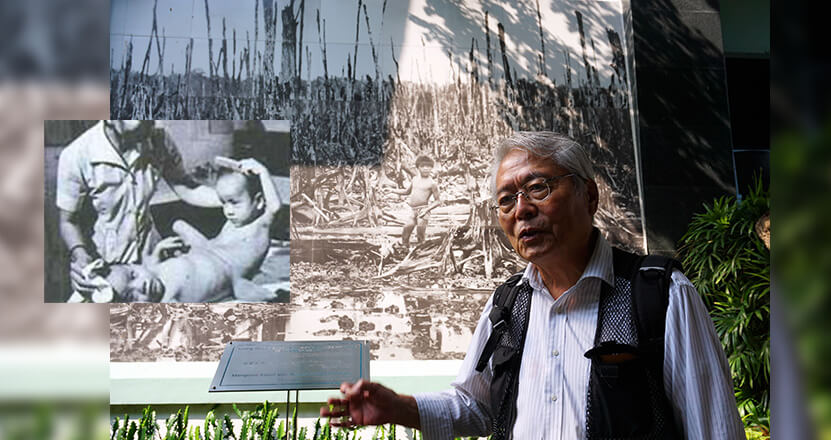 Nakamura is an award winning international photojournalist born in Nagano Prefecture, Japan who has been photographing the affects of Agent Orange or Dioxin on both its local victims and Vietnam veterans. Through his sensitive photographs Nakamura takes the genre from mere photojournalism and transforms it into art.

Although he’s taught ecology and journalism at other schools such as Yamanashi University, and at the Institute of Modern Photography, Nakamura is Professor Emeritus from Gifu University where he taught photojournalism for several years until his recent retirement. He has been working in the field as correspondent and photojournalist for Japanese news agencies since 1961 to the middle of 70’s. Nakamura has been recording the effects of Agent Orange on victims for the past thirty years during which time he’s come into contact with plethora of victims not only in Vietnam but also the United States and Korea. In the late 90’s Nakamura produced a successful TV documentary on Agent Orange, or Dioxin commonly used to burn wastes by many industrialized countries. Since 1974 Nakamura has written four books on the topic that have each sold anywhere from 7,000 to 20,000 copies. Nakamura has also been nominated for the Eugene Smith award of 1983, has earned the 8th Nobuo Prize, 1983 from Nikon as best photographer of the year, and a special prize from the 1995 Congress of Journalists. Last year Nikon hosted his exhibition “30 Years Tracing of Agent Orange” held at their gallery in Ginza, Tokyo and traveling to Osaka Nikon.

Nakamura’s poignant images of victims don’t merely record the devastation resulting from these chemicals but are also bittersweet essays into the human psyche that despite much suffering manages to find some positive aspect in life. His black and white glossies depict American Veterans hugging their disabled children who still manage to smile for the camera. Or, he portrays Vietnamese children playing in rice fields while hobbling around on crutches. Nakamura’s viewpoint of such horror although heart-wrenching, is nevertheless life-affirming. By depicting the horrors of war in all their graphic realism, he hopes to exorcize them from our future.