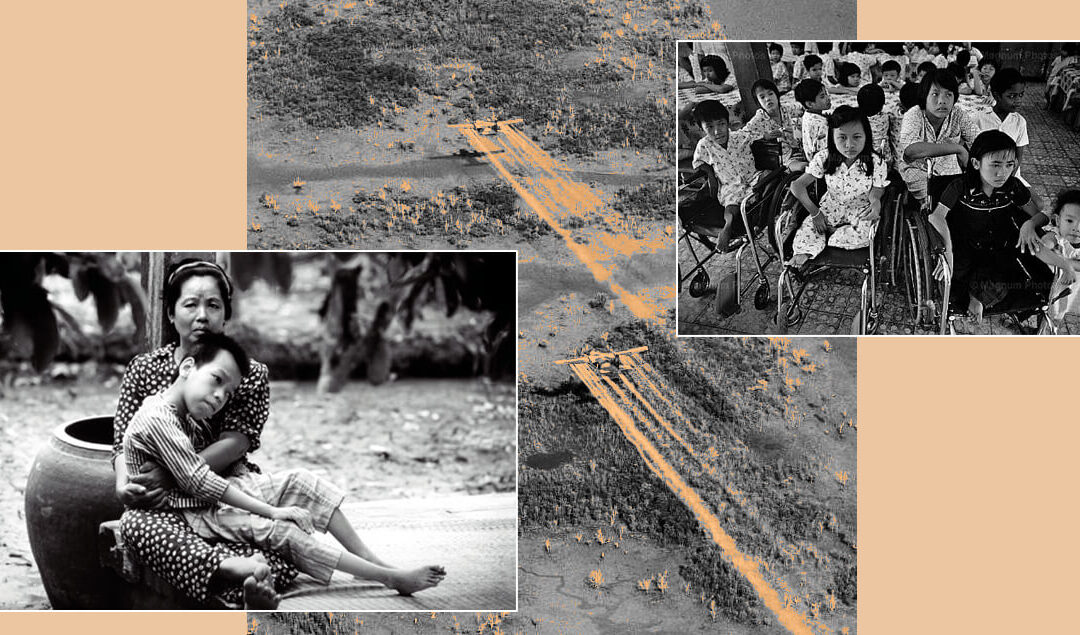 We, victims of Agent Orange/dioxin and other toxic chemicals, together with supporters and scientists from the United States, Australia, Canada, France, Germany, Great Britain, New Zealand, Russia, the Republic of Korea, Switzerland, and Vietnam participating in the International Conference of Victims of Agent Orange/dioxin held in Hanoi, Vietnam on March 28th and 29th 2006, make the following appeal to the international community:

We have discussed the effects of Agent Orange contaminated with dioxin and other toxic chemicals on human life and health, and the sufferings of those affected. Based on this exchange of views, we unanimously confirm the following:

1. During the war waged in Vietnam, the US chemical companies manufactured and supplied millions of litres of toxic chemicals disguised as defoliants or herbicides. Those chemicals contained high levels of dioxin. They were an utterly lethal substance.

2. Those toxic chemicals destroyed the environment, millions of acres of forests, leading to an imbalanced ecology, great loss of timber resources and the disappearance of several animal species as well as precious forest vegetation. As a consequence, natural disasters such as flood, erosion and drought have become more common and impacted severely on agriculture, the main source of subsistence for South Vietnamese residents.

a. Millions of Vietnamese living in their homes and members of the liberation armed forces, and those working for the former Saigon regime and armed forces, an ally of the US at that time.

Various investigations and scientific studies (frequently with participation of foreign and American scientists) have demonstrated that Vietnamese victims have suffered a variety of serious diseases – even far more and worse than the dioxin-related diseases listed by the US National Academy of Sciences Institute of Medicine between 1994 and 1995. In addition, many female victims have experienced reproductive problems. Many of them have been deprived of the ability to bear children and to experience the joy of being a mother. The most painful effect, however, is that Agent Orange/dioxin has already harmed the next generation of children and will do the same to the following ones. Many children have been born without the experience of war but have deformed bodies and can never enjoy the simplest experience of happiness – that is to live as an ordinary human being.

For the above-said reasons, victims of Agent Orange/dioxin and their families are among the poorest and most unhappy of the society. Many thousands of victims have died without justice for themselves and their families.

The fact that there are large numbers of Vietnamese victims suffering from various kinds of serious diseases, is understandable for they have been living in areas sprayed by Agent Orange/dioxin.

b. Many thousands of soldiers and officers from the United States, the Republic of Korea, Australia, and New Zealand were also contaminated by Agent Orange/dioxin while involved in the Vietnam War. They have consequently suffered many serious diseases, which caused enormous sufferings to their loved ones. Several countries have recognized the health effects of Agent Orange/dioxin and other toxic chemicals and paid for medical and other treatments for affected veterans. Nevertheless, many others do not have those entitlements and still have to fight for recognition, compensation and justice.

The contamination by Agent Orange/dioxin and other toxic chemicals has led to the poor physical health and death of many, loss of family happiness, a life of poverty and deprivation for deformed children, and absence of support in times of sickness and old age. The manufacture and use of those toxic chemicals are in violation of international laws.

4. We utterly dispute the conclusion reached by Judge Jack Weinstein who dismissed the Vietnamese victims’ lawsuit without paying respect to justice and the obvious realities in Vietnam.

5. We, victims of Agent Orange/dioxin, and our supporters affirm our commitment to working in solidarity, regardless of race or political belief, and demand that the US chemical companies pay compensation equal to their liability, as stipulated by law.

6. We strongly support the lawsuit filed by the Vietnamese Agent Orange/dioxin victims till their final victory in their fight for justice.

We congratulate the initial success of the Republic of Korean victims and will continue to support them until their final victory. We support the fight for justice of the Vietnam veterans of the United States, Australia and New Zealand.

We nevertheless support the victims of Agent Orange/ dioxin in Canada and other countries in their struggle for justified in trust.

7. We demand that the United States Government be held responsible for making contributions to overcoming the consequences of toxic chemicals.

8. We call upon governments of the Republic of Korea, Australia, New Zealand and the United States to adopt appropriate policies towards victims of their respective countries and also support the victims in Vietnam.

9. We call upon governments, international and national organisations, and non-governmental organisations to provide material and spiritual support for victims of Agent Orange/dioxin in Vietnam and help the country overcome the heavy aftermath of the toxic chemicals.

The pain and sufferings are not a single individual’s.

This struggle for justice is for the entire world, for future generations, and for our peaceful and healthy Planet Earth.

* Evening
— Each country delegation to discuss the proposed Declaration.

* Afternoon
— Broad discussions to confirm the harmful effects of AO/dioxin on human health and life.
— Exchange of views to improve our efficiency needed in the struggle demanding U.S companies to pay damages.
— Discussion on how to enjoy long- standing mutual support and cooperation among victims.
— Reading of the Conference Declaration to get additional contributions and to finalize the declaration for publicity.
— Closing session.

Tentative List of participants
Make presentation/writing speech at the conference