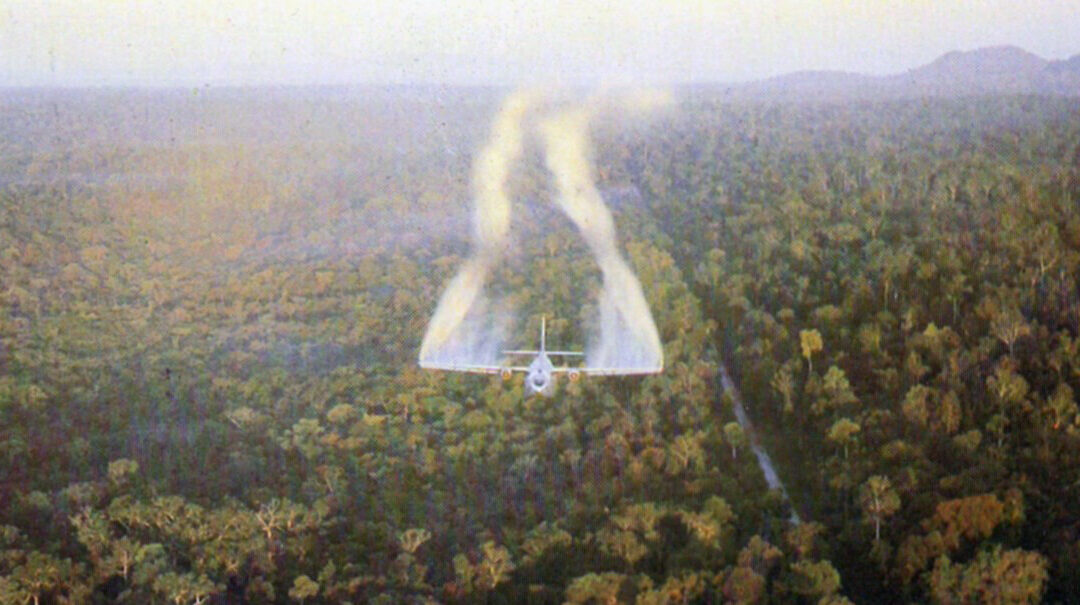 Today marks the 52nd anniversary of the start of the chemical warfare program in Vietnam, a long time with NO without sufficient remedial action by the U.S. government. One of the most shameful legacies of the American War against Vietnam, Agent Orange continues to poison Vietnam and the people exposed to the chemicals, as well as their offspring.

For over 10 years, from 1961 to 1975, in order to deny food and protection to those deemed to be “the enemy,” the United States defoliated the land and forests of Vietnam with the chemicals known as Agent Orange. These chemicals contained the impurity of dioxin – the most toxic chemical known to science.  Millions of people were exposed to Agent Orange and today it is estimated that three million Vietnamese still suffer the effects of these chemical defoliants.

In addition to the millions of Vietnamese still affected by this deadly poison, tens of thousands of U.S. soldiers are also affected. It has caused birth defects in hundreds of thousands of children in Vietnam and the United States – that is, the second and third generations of those who were exposed to Agent Orange decades ago. Medical evidence indicates that certain cancers (for example, soft tissue non-Hodgkin’s Lymphoma), diabetes (type II), and in children spina bifida and other serious birth defects, are attributable to the exposure.

The deadly mark left by Agent Orange on the natural environment of Vietnam includes the destruction of mangrove forests and the long-term poisoning of soil especially in the known “hot spots” near former U.S. military bases.

Surviving Vietnam veterans in the United States, after many years of organized action, have finally achieved limited compensation from our government for some illnesses they suffer due to Agent Orange poisoning. While this struggle continues, the three million surviving Vietnamese victims have received no such compensation or any humanitarian aid from the U.S. government. Nor have the children of the vast majority of U.S. veterans suffering from Agent Orange-related birth defects received any medical or other assistance.

The United States does not want to admit that its use of chemicals with poison as weapons of war on civilian populations violates the laws of war, which recognize the principle of distinction between military and civilian objects, requiring armies to avoid civilian targets. These laws of war are enshrined in the Hague Convention and the Nuremberg principles, and are codified in the Geneva Conventions of 1949 and the Optional Protocol of 1977, as well as the International Criminal Court statute.

The use of Agent Orange on civilian populations violates the laws of war; yet no one has been held to account. Taxpayers pick up the tab of the Agent Orange Compensation fund for U. S. Veterans at a cost of 1.52 billion dollars a year. The chemical companies, most specifically Dow and Monsanto, which profited from the manufacture of Agent Orange, paid a pittance to settle the veterans’ lawsuit to compensate them, as the unintended victims, for their Agent Orange-related illnesses. But the Vietnamese continue to suffer from these violations with almost no recognition, as do the offspring of Agent Orange-exposed U.S. veterans and Vietnamese-Americans.

Our government has a moral and legal obligation to compensate the people of Vietnam for the devastating impact of Agent Orange, and to assist in alleviating its effects. Indeed, the U.S. government recognized this responsibility in the Peace Accords signed in Paris in 1973, in which the Nixon administration promised to contribute $3 billion dollars toward healing the wounds of war, and to post-war reconstruction of Vietnam. But that promise remains unfulfilled.

For the past 52 years, the Vietnamese people have been attempting to address this legacy of war by trying to get the United States and the chemical companies to accept responsibility for this ongoing nightmare. An unsuccessful legal action by Vietnamese victims of Agent Orange against the chemical companies in U.S. federal court, begun in 2004, has nonetheless spawned a movement to hold the United States accountable for using such dangerous chemicals on civilian populations. The movement has resulted in pending legislation, H.R. 2519, The Victims of Agent Orange Relief Act of 2013 [http://www.govtrack.us/congress/bills/113/hr2519], which provides medical, rehabilitative and social service compensation to the Vietnamese victims of Agent Orange, remediation of dioxin-contaminated “hot spots,” and medical services for the children of U. S. Vietnam veterans and Vietnamese-Americans who have been born with the same diseases and deformities.

Last year on the 51st anniversary of the beginning of the U.S. chemical war on Vietnam, we requested people around the world to observe 51 seconds of silence in memory of those who suffered and suffer from the effects of Agent Orange, and after the silence to take at least 51 seconds of action to support the struggle.   This year again we urge you to reflect on the ongoing tragedy and take action by ensuring that your Congressional representative co-sponsors H.R. 2519, introduced by Rep. Barbara Lee.

Marjorie Cohn is a professor at Thomas Jefferson School of Law and former president of the National Lawyers Guild. Jeanne Mirer, a New York attorney, is president of the International Association of Democratic Lawyers. They are both on the board of the Vietnam Agent Orange Relief and Responsibility Campaign, https://www.vn-agentorange.org