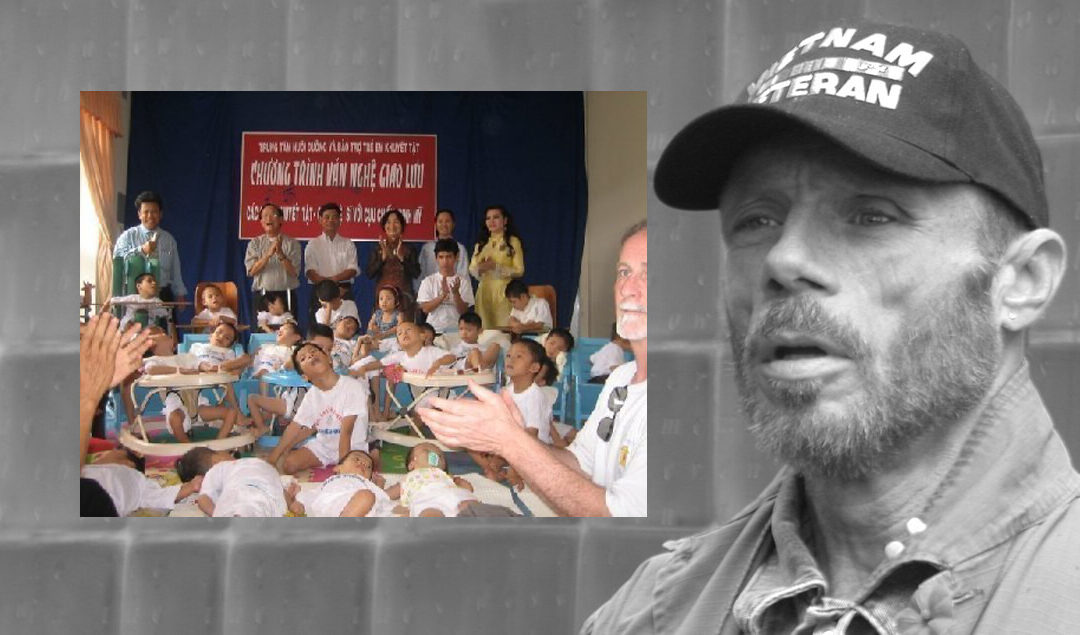 Published in the VAORRC Newsletter, November 2006

Featured image: David Cline background b/w by M. McPherson; Some of the children being cared for at Cu Chi facility run by the Catholic Church. These children are a continuing legacy of the use of chemical weapons by the U.S. 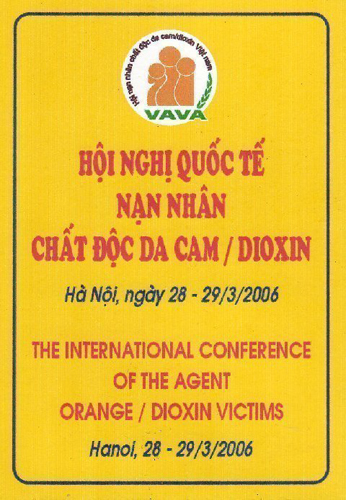 First let me thank the Vietnam Association of Victims of Agent Orange/Dioxin for organizing this international conference and to the Agent Orange Vets from Korea, Australia, New Zealand and Canada who have traveled here to participate.

The US delegation I am leading is made up of Agent Orange vets Frank Corcoran, Joan Duffy, Ralph Steele and Dan Shea.

I was an infantryman with the 25th Infantry Division in Cu Chi and Tay Ninh in 1967 and was wounded 3 times but do not suffer from dioxin related health conditions myself.

When I came back from the war, I had knowledge of the use of Agent Orange from having seen sprayed areas and knew that they destroyed nature, but had no knowledge of the negative effects these defoliants had on human beings.

I remember in 1969 a veteran I knew named Jeff Sharlett died of cancer at age 27 in the Miami, Florida Veterans Hospital and thinking it was strange that someone so young had cancer.

Over the years other friends of mine got sick or had deformed children or sometimes died. Mike Keegan and John Miffin who died and John and Rena Kopystenski who had several children with birth defects are among them. So this issue has always been personal to me.

In 1977, a woman who worked as a claims representative at the Chicago Veterans Administration named Maude DeVictor was the first person to really put two and two together when she witnessed the VA higher-ups denying veterans claims and covering up their health problems and the connections to dixon exposure.

The next year, 1978, a veteran named Paul Reutershan who was sick with cancer got on television and said “my government killed me in Vietnam and I didn’t even know it”. He began a lawsuit against the chemical companies who manufactured Agent Orange, Blue, White, Purple etc. but he never lived to see that lawsuit completed because he died within the year.

The reason that this lawsuit was started was because the VA was denying veterans claims for medical treatment and compensation and according to US law (the Feres Doctrine), former military personell cannot sue the government for these type of claims.

From 1978-1984 the lawsuit continued and was eventually settled, although many veterans opposed the settlement, for 180 million dollars. Sadly many veterans got very little of that money since the army of lawyers who got involved got a good portion of it in legal fees.

I have been a member of the Vietnam Veterans Against the War since 1970 and that organization played a critical role in launching the movement for justice for Agent Orange vets, supporting Maude Devictor who became the godmother of the movement, recruiting veterans to joining the lawsuit and raising general public awareness of this issue.

But we always believed that while the chemical companies had responsibility and should be held liable, the primary responsibility lay with the US government which ordered and continued to use these poisons after they were aware of the negative effects on people. Instead of changing course, they covered up the facts and kept using them until 1971. After that they gave their remaining supplies to the former Army of the Republic of Vietnam who continued to use them until 1975 when that regime ceased to exist.

In VVAW, our demand has always been Testing, Treatment and Compensation for Agent Orange Victims. We never thought the lawsuit against the chemical companies was the answer, but rather a way to continue putting pressure on the US government.

Finally progress was made on that front when in 1991, Congress passed the Agent Orange Act, acknowledging several conditions as being dioxin related for purposes of medical treatment and disability compensation. It also established a mechanism for the National Academy of Sciences, Institute of Medicine to review new studies and make recommendations to the Secretary of the Veterans Administration for expanding the recognized conditions.

Currently there are thirteen conditions acknowledged by the VA including two conditions among veterans children but over 27 conditions have been rejected since there was a finding by the IOM of not enough scientific research to indicate a connection to dioxin exposure.

So many veterans are still not being treated with any fairness. And how does someone give justice to all those who have died? The hidden casualties of the Vietnam War continue to grow but the struggle continues as well.

And today we need to talk about the other side of the coin, not just American, Korean, Australian, New Zealand and Canadian veterans but the people of Vietnam as well.

Remember also that these chemicals were also used in parts of Cambodia and Laos as well as along the DMZ in Korea and in Panama.

In the United States we began the Vietnam Agent Orange Relief & Responsibility campaign to support the efforts of VAVA and join with concerned veterans and people, in the U.S. and other countries to demand Justice for ALL Agent Orange Victims!

While the Campaign is sponsored by Veterans For Peace, it is made up of war veterans, Vietnamese-Americans, peace and labor activists, environmentalists and other friends of Vietnam. We are supporting the international petition drive in support of the VAVA lawsuit and recently sponsored a 10 city speaking tour by 4 VAVA members.

We are also planning to encourage sympathetic representatives and senators to introduce legislation in Congress for the US government to step up to the plate and provide compensation and medical assistance, if not for political reasons, then for moral and humanitarian purposes. It is time to really heal the wounds of that war, not to ignore them or let them fade into history.

Let me make on last point. This is a struggle to expose and end the use of chemical weapons by all nations but especially by my government. This is not just about something that happened over 30 years ago. Today the Bush administration has led our country into another war, this time in Iraq and has used Depleted Uranium weapons that will poison US troops and Iraqi citizens. They have also used White Phosphorous bombs against whole cities like Fallujah.

It is time for humanity to demand an end to these weapons as part of our efforts to abolish war. That is what Veterans For Peace is pledged to work for. That will only come through the determined efforts of all of us, throughout the world.

“If there is no struggle, there is no progress. Those who profess to favor freedom yet depreciate agitation, are men who want crops without plowing up the ground, they want rain without the thunder and lightning. They want the ocean without the awful roar of its many waters.This struggle may be a moral one, or it may be a physical one, but it must be a struggle. Power concedes nothing without a demand. It never has and it never will”

With that as our watchword, let’s make this conference a call to all the people of the world. JUSTICE FOR ALL AGENT ORANGE VICTIMS!