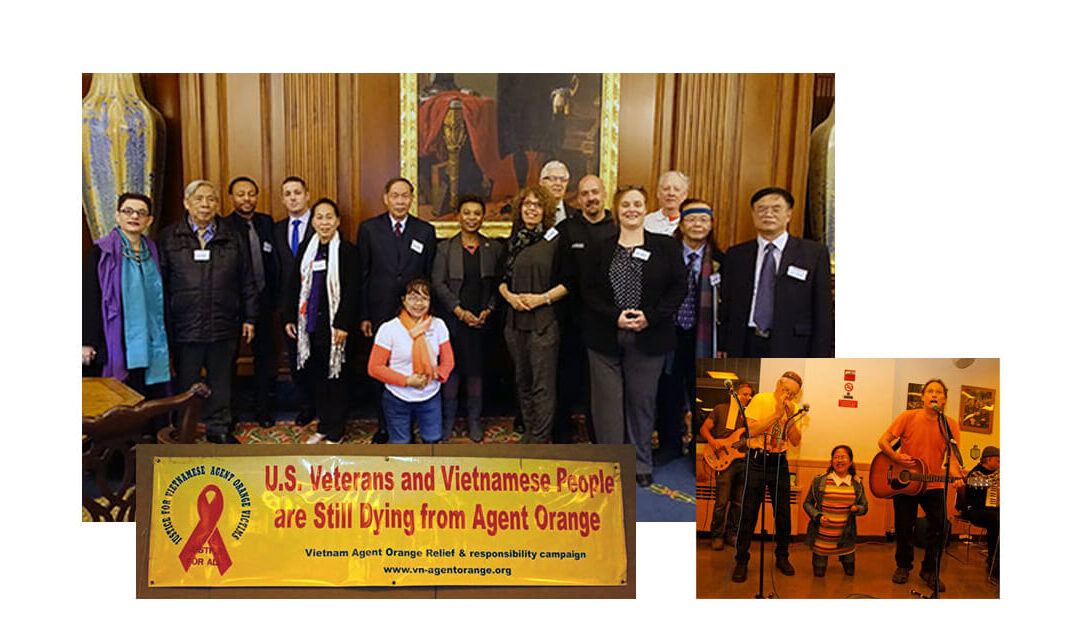 By Susan M. Schnall at VVAW.org

For two weeks this past December, the leadership of the Vietnam Association for the Victims of Agent Orange/Dioxin (VAVA) visited New York City and Washington, DC. They had a very busy schedule that included colleagues and friends, Senators, legislative aides, and Congresswoman Barbara Lee (D-CA) to thank them all for their continuing support for the victims of the US spraying of chemical herbicides during the American War in Vietnam. Mr. Rinh, President of VAVA, expressed his appreciation to Congresswoman Lee for sponsoring HR 2114, the Victims of Agent Orange Relief Act of 2015, that would provide services for those harmed in Vietnam from this poison, as well as clean up land and ecosystems that remain contaminated and continue to destroy the food and the people. 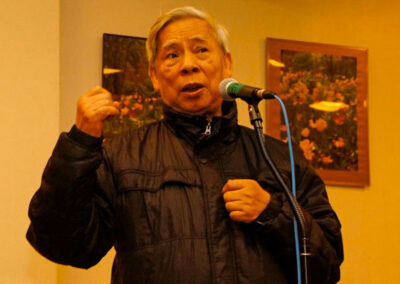 Nguyen Minh Y states his (and VAVA’s) support for the Americans and their children who suffer from the impact of the war. 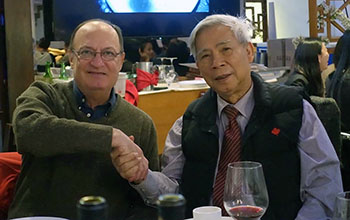 Ed Damato (long time VVAW member who served in the US Army in Vietnam) and Nguyen Minh Y at VVAW dinner with VAVA. 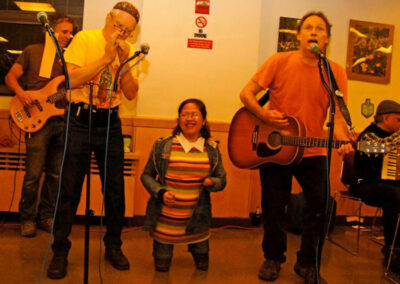 Tran Thi Hoan dancing with members of the band Filthy Rotten System at the Holiday Party. 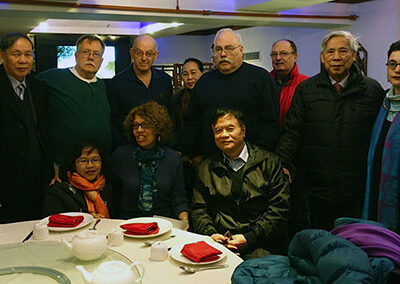 VVAW members at VAVA dinner where VVAW donated $5,000 for the building of two homes in Quang Binh Province.

The VAVA delegation was joined by the Vietnam Agent Orange Relief and Responsibility Campaign (VAORRC) — supported by VVAW, IVAW, Veterans for Peace (VFP), and the Children of Vietnam Veterans Health Alliance (COVVHA). Heather Bowser, co-founder of COVVHA, was born missing her right leg and with webbed fingers and toes. She is the daughter of an American serviceman who was in Vietnam during the use of Agent Orange. Heather explained that this legislation would bring parity of services to the children of both the women and men in the US military who served in Vietnam. Currently, the VA recognizes only the children born with birth defects of American servicewomen, and, with the recently released Institute of Medicine Report, has downgraded recognition for even spina bifida for the children of American servicemen.

VAVA and VAORRC held a briefing on Capitol Hill sponsored by Representative Lee and attended by about thirty legislative aides of House representatives. We reviewed the current state of the legislation, our efforts to educate the American people about the destruction done by the chemical herbicides to our own troops and their families, and the Vietnamese that continues today. Mr. Rinh informed the group of the efforts of VAVA to identify those affected, and obtain and provide services to them, including the children born with severe birth defects. Tran Thi Hoan was born without legs and an atrophied hand as a result of her mother’s exposure to Agent Orange. Tran, an active member of VAVA, is a college graduate working as a computer science professional. She spoke about those Vietnamese children less fortunate than her who are unable to live on their own, or die young and in terrible pain because of their debilitating birth defects. Paul Cox, a Vietnam veteran and core member of VAORRC, spoke of the necessity for the US government to take responsibility for the damage done to the Vietnamese and provide necessary services to the people.

Our delegation had an extensive meeting with Tim Reiser, foreign policy aide to Senator Patrick Leahy (D-VT), and one of the most influential behind-the-scene forces in Washington, DC. He works as a Democratic clerk for the Senate Appropriations Subcommittee on State and Foreign Operations, and for the past several years has managed to obtain several millions of dollars for the clean-up of Danang Airport (formerly a US base), and for provision of some services for disabled children in Vietnam. Tim noted that in his 25 years of working in the Senate, this was the first time that a group of Americans and Vietnamese had come together to talk with him about the needs of both groups.

VAVA returned to New York on Friday, December 18 for a dinner meeting with members of VVAW. It was an extraordinary event as folks told their stories of that conflict and their memories from that time. Frank Toner served as a medic in-country and refused to carry a gun. Per Oldman was a Swedish national who volunteered for the Marines and fought at Khe Sanh, at the same time Mr. Rinh was fighting as a soldier in the North Vietnamese Army. Joe Hirsch is a long standing member of VVAW who was in military intelligence during the conflict and speaks fluent Vietnamese. Ed D’Amato was with the US Army in Vietnam in 1966. Ken Dalton was in the Navy, based on a ship off the coast of Vietnam. Brian Matarrese, who was in the US Army during the Vietnam conflict as well as a member of VVAW and social activist for many years, helped bring the group together.

VVAW donated $5,000 to VAVA for the building of homes in Quang Binh Province, an area that was subjected to repeated bombings throughout the American War. The whole town of Dong Hoi was completely destroyed by the bombing, and the people continue to suffer from the repeated spraying of Agent Orange. At the dinner, individual VVAW members also donated money to the victims of Agent Orange.

It has been over forty years since the last US troops left Vietnam and yet, the damage we caused remains — in the contaminated land and in the people who pass on cells changed by dioxin contamination from generation to generation. Bomb craters remain from Operation Rolling Thunder and unexploded ordnances makes the land dangerous to farm and puts innocent children at risk when they play in the fields. It is up to us to clean up those terrible remnants of the American War in Vietnam, to continue to assist the Vietnamese people to heal, and in doing so, heal ourselves.