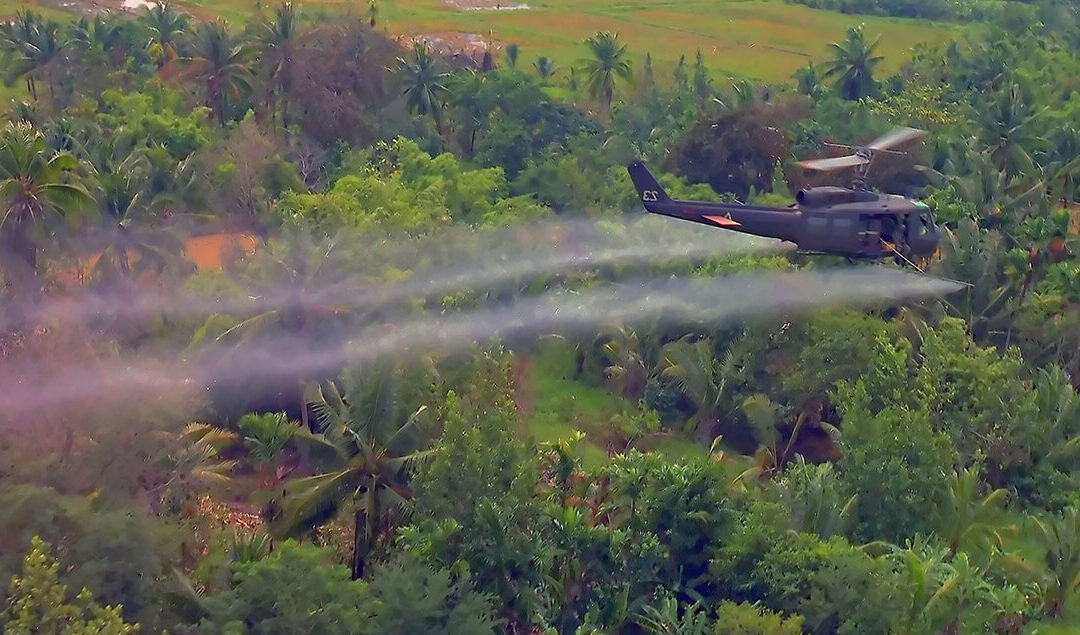 When I served as an Army medic in Vietnam, I often saw a 19-year-old solider whose job was to spray an herbicide called Agent Orange on anything green inside my base. The same was true around the perimeter, to deny cover to any enemy intruders and to ensure a clear line of fire in case of enemy attack.

As I visited numerous American military bases in Vietnam during the war, they all looked like moonscapes. They were stripped of grass and foliage by the same chemical for the same reasons.

Now, more than 40 years after the war, we know that Agent Orange contained dioxin, which is among the world’s most lethal toxins.

American veterans of Vietnam fought a long, hard postwar struggle to get our Veterans Administration to compensate troops for a dozen diseases associated with Agent Orange/dioxin. But what about the Vietnamese who were also exposed? And what about the leftover “hot spots” of dioxin that still exist there and continue to harm people to this very day?

The U.S. military shipped, stored, and sprayed millions of gallons of Agent Orange/dioxin over a quarter of the former South Vietnam, both for crop destruction and to deny cover to the enemy. In this country we know from our own experiences with dioxin at Love Canal and Times Beach that these toxic hot spots can cause death and disease to those who come in contact with the chemical. The diseases range from spina bifida to Parkinson’s and certain forms of cancer.

However, the political battle still rages in Washington. VA Secretary Shinseki has classified three additional diseases as associated with Agent Orange/dioxin, thereby making veterans with those conditions eligible for compensation. In addition, women who served in Vietnam can receive compensation if their children are disabled with any of 14 birth anomalies.

That’s because Agent Orange/dioxin can cause DNA damage for generations.

The struggle is far from over. We have reason to believe that many additional adverse medical conditions in Vietnam veterans of both sexes also are caused by these exposures, including possible genetic problems in grandchildren and great-grandchildren.

Meanwhile, in Vietnam, Agent Orange/dioxin damage also lingers. While we have made some progress for Americans harmed by these exposures, our friends in Vietnam have a long way to go to match our modest gains. The Vietnamese Red Cross estimates that 3 million people, including more than 150,000 of today’s children, are disabled because of the chemical. Former airbases like Da Nang contain dangerous toxic hot spots where Agent Orange was stored and handled and spilled into the ground. Dioxin is hard to break up in the soil and it lasts in human body tissue for years.

Unlike the United States government, the Vietnamese recognized that Agent Orange/dioxin might cause chromosomal damage in the second and third generations of original victims. My own experience is that families of American veterans also suffer. But the VA recognizes no health consequences from Agent Orange/dioxin in disabled daughters and sons of male veterans who served in Vietnam.

It’s time to put this legacy of the war in Vietnam to rest once and for all. A blue-ribbon commission of prominent Americans and Vietnamese has called for a 10-year, $300 million cleanup of Agent Orange/dioxin in Vietnam. The resources would eliminate the hot spots, restore damaged ecosystems and provide humanitarian assistance to the Vietnamese disabled population, including those second- and third-generation children affected by the chemical.

It seems to me that $30 million a year for 10 years, from government, foundation and private sources, is a small price to pay to help remedy the damage caused.

This is a humanitarian concern we can do something about. Recent progress in methods of treating contaminated soils and helping Vietnam’s disabled population shows that America is at its best when it steps up to heal past wounds.

If we make progress on nothing else regarding the ravages of Agent Orange and other toxic substances used in Vietnam, we must properly care for our future generations — on both sides of the Pacific.

Weidman served as an Army Medic with the AMERICAL Division in I-Corps Vietnam in 1969. He currently serves as Executive Director for Policy & Government Affairs on the national staff of Vietnam Veterans of America (VVA).