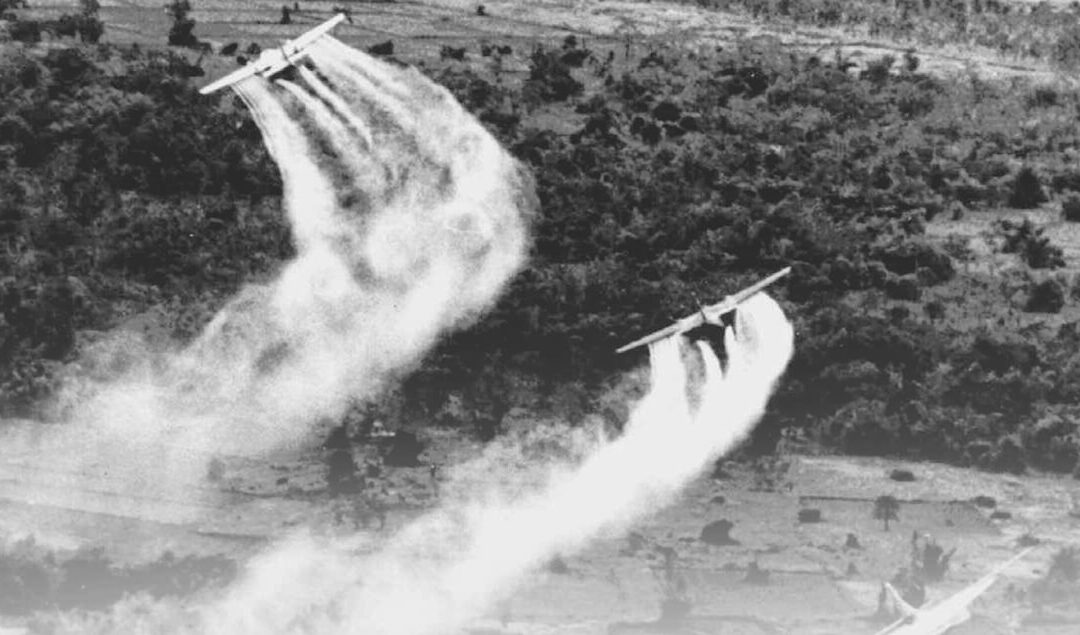 A Seoul court yesterday ruled that two American chemical manufacturers must pay reparations to Korean veterans who were harmed by exposure to a toxic defoliant while fighting in the Vietnam War.

Ten veterans, representing 20,615 victims, had filed a lawsuit against two American companies which had supplied the harmful defoliant – known as Agent Orange – containing dangerous amounts of dioxin. The victims said they suffered various cancers, peripheral nerve paralysis, acne and bone marrow diseases. The symptoms were said to have been passed down to the second generation.

The U.S. government had sprayed 72 million liters of the chemical in Vietnam against guerrilla fighters who sought the cover of the dense jungles, official records showed.

Judge Choi Byoung-deok of Seoul District Court yesterday ruled against the two companies, Dow Chemical Company based in Midland, Michigan, and Monsanto Company in St. Louis, Missouri, and ordered them to pay a total of 63.2 billion won ($65.2 billion) in compensation to the 6,795 defendants who suffered physical handicaps from the exposure to dioxin.

Each person should receive compensation of between 6 million and 46 million won, the judge said.

This is the first time a court ruled against the two American companies and ordered them to pay reparations to the victims exposed to the chemical.

The two companies were found guilty of including more than the safe standard of 0.05 ppm of dioxin into the defoliant, creating a chemical toxic to people exposed to it.

The defoliant is a form of pesticide which causes the leaves of a plant to fall off. The United States government claimed it used the defoliant between 1965 and 1973 to get rid of the jungle in Vietnam so that Vietnamese guerrilla forces would be exposed and their food supply would be cut off.

The defoliant was found in 1969 to contain dioxin, which may cause cancer and peripheral nerve paralysis after five to ten years in the body, and can also be passed down to the second generation. The National Academy of Sciences established that there is a direct causal link between dioxin and various cancers, acne, diabetes, and bone marrow diseases.

The NAS, however, said “there is insufficient evidence to establish a direct correlation between dioxin and diseases of the peripheral nerves, most common in victims.” Only 6,795 defendants of 20,615 defendants who filed the appeal will be compensated, excluding the victims who suffered peripheral nerve diseases.

A U.S. court in 1984 had ordered the U.S. manufacturers to pay $180 million as settlement for American veterans exposed to Agent Orange. Since then, many veterans’ victims who did not receive compensation had filed lawsuits against the U.S. manufacturers but lost each time.
About 20,000 Koreans filed two separate lawsuits in 1999 against the U.S. firms, seeking more than 5 trillion won in damages.

In 2002, a lower court had ruled the “causal relationship between the plaintiffs’ illnesses and Agent Orange has not been proven.”

South Koreans made up the largest foreign contingent of U.S. allies fighting in Vietnam, contributing some 320,000 troops. Around 5,077 soldiers were killed and 10,962 wounded.

The Vietnamese government in June 1994 announced that 2 million civilians and soldiers were suffering from the aftermaths of being exposed to the defoliants. The United Nations has since then established the defoliant as a chemical weapon.