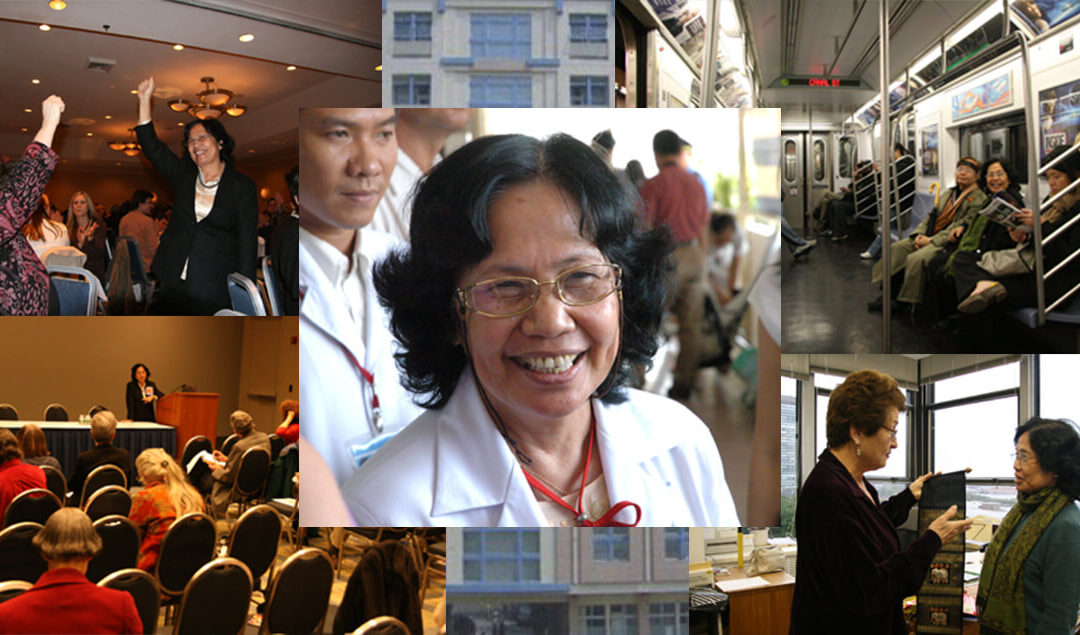 On November 6, 2007, the American Public Health Association, the largest public health association in the world, adopted a policy statement calling for U.S. government and the chemical companies involved to provide specified compensation to Vietnamese harmed by the spraying of dioxin laden Agent Orange during the war more than 30 years ago. The APHA called for compensation to cover medical care and services, development of community support organizations, chronic care and medical equipment.

The APHA further asks that the U.S. government and involved chemical companies be responsible to remediate those areas in Vietnam which still contain high levels of dioxin (the “hot spots.”)

The policy statement further called for federal support for research and promoting of involvement of schools of public health, medicine and dentistry in the study of health consequences of the Vietnam War on all participants.

Dr. Nguyen Thi Ngoc Phuong, a leading clinician/researcher from Vietnam and the Chairwoman of the Obstetrics & Gynecology Department of the Medical University of Ho Chi Minh City, who presented scientific findings on the effects of Agent Orange on women and children at the APHA, said, “The APHA policy statement will help to accelerate the present cooperation between the U.S. and Vietnam on remediating the environmental affects of Agent Orange. Three million Vietnamese people are now suffering painful and debilitating effects of Agent Orange and this policy statement will contribute to easing their suffering and improve the public health.”

Susan Schnall, a public health expert with the Vietnam Agent Orange Relief & Responsibility Campaign and a Vietnam era Navy veteran, observed that, “Many American veterans will welcome the APHA’s statement because they experience firsthand the terrible consequences of exposure to Agent Orange. As a health professional who has witnessed the suffering of both American soldiers and Vietnamese women and children, I believe that the APHA is doing the
right thing!”

Press_release_Public_Health_tour
Photos of Dr. Ngoc Phuong and her recent US tour

We are about to embark on the first Vietnam Agent Orange Public Health tour and we need your help! The dioxin laden Agent Orange sprayed by the U.S. government over the people and land of Vietnam during the war more than 30 years ago still constitutes a public health crisis for those directly exposed and for their children and grandchildren who are born with gross birth defects and disabilities.

Building on the success of our Second Vietnam Agent Orange Justice Tour in June, we will be hosting renowned Vietnamese doctor and scientist Dr. Nguyen Thi Ngoc Phuong from November 1–14. Dr. Phuong is a leading clinician/researcher on the effects of Agent Orange on women and children in Vietnam. A gynecologist/obstetrician, Dr. Phuong is Chairwoman of Obstetrics & Gynecology at the Ho Chi Minh City University of Medicine and Pharmacology.
Dr. Phuong will be visiting New York, Boston and Washington, DC to speak at medical schools, hospitals, environmental and community organizations. A highlight of her visit will be her attendance at the Annual Meeting of the American Public Health Association where she will be recognized and present on a number of panels and workshops.

The timing of Dr. Phuong’s visit is particularly significant because the American Public Health Association (APHA) will be voting on a historic policy position on justice and compensation for Vietnam’s Agent Orange victims. As APHA is the oldest, largest and most diverse organizations of public health professionals in the U.S., this policy statement will create additional momentum towards achieving our goal of meaningful compensation for the Vietnamese people who suffer so much from the effects of Agent Orange.

If you were able to meet the members of our Second Agent Orange Justice tour in June, you witnessed the health consequences of dioxin on their bodies. You may have already heard that two of the members of the delegation died from their cancers after returning home to Vietnam in July. Both Mr. Nguyen Van Quy and Ms. Nguyen Thi Hong knew their illnesses were terminal when they came to the U.S. and yet they courageously traveled thousands of miles from home, in great pain, to appeal for justice for the more than 3 million Agent Orange victims.

With Dr. Phuong’s visit we hope to engage the public health and environmental justice communities to raise their voices to assure the Vietnamese people treatment, compensation and cleanup of the toxic hot spots. U.S. veterans fought long and hard for a measure of compensation for their suffering as a result of Agent Orange and play a crucial role in this Campaign.

But we need YOUR help! We need funds to pay for airline and train tickets, to print educational materials and to do all of the myriad tasks necessary to a successful speaking tour. Please give as generously as you are able. Tax deductible checks may be made out to Veterans For Peace – VAORRC, and send to the Vietnam Agent Orange Relief & Responsibility Campaign at P.O.Box 303 – Prince Station, New York, NY 10012-0006.

Dr. Nguyen Thi Ngoc Phuong has been the Director of Tu Du Hospital in Ho Chi Minh City [HCM City] and chairperson of the Obstetrics and Gynecology Department. She is Chief of Obstetrics and Gynecology of the Medical University of HCM City and Director General of Ngoc Tam Hospital Corporation of HCM City. Dr. Phuong has researched and published extensively on the deleterious health impact of Agent Orange on the people of Vietnam including the impact of toxic chemicals on reproductive outcomes, dioxin induced risk to pregnancies, and women giving birth to grossly deformed babies as seen at the OB/GYN Hospital in HCM City. Dr. Phuong has coauthored articles with American scientists on Agent Orange and the risk of gestational tropoblastic disease in Vietnam and chlorinated dioxins and dibenzofurans in human tissues from general populations.

As Director of Tu Du Hospital, Dr. Phuong established a “pregnant care network” to promote appropriate and quality births for women in remote areas of Vietnam. She established a training program for rural midwives from various ethnic minorities living in the Central Highlands who use their ethnic languages to educate people about reproductive health issues.